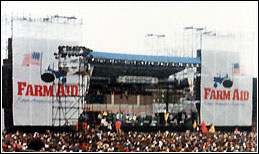 According to the Farm Aid website (www.farmaid.org) the mission of Farm Aid is "to keep family farmers on their land. Family farmers are our only guarantee for fresh, local food. Our goal is to bring together family farmers and citizens to restore family farm-centered agriculture. Family farmers ensure safe, healthful food, protect natural resources, and strengthen local economies".

I do not think I will ever again go to a concert with a lineup as large and diverse as Farm Aid. The twelve hour Farm Aid concert took place in Champaign, Illinois at Memorial Stadium on the Campus of the University of Illinois at Urbana Champaign on Sunday, September 22, 1985. This diverse lineup included Farm Aid founders Willie Nelson, John Mellencamp and Neil Young. I have listed the full lineup below. 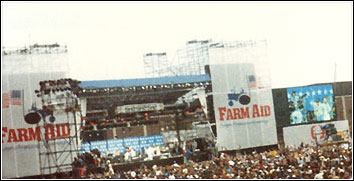